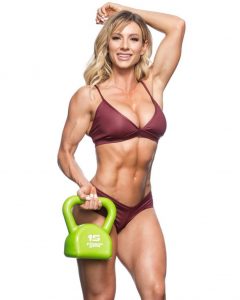 Born and raised in Minnesota in the northern USA, Paige’s family was very unstable. She lived in a trailer with an alcoholic father. Her parents eventually divorced, and 4-year-old Paige Hathaway found herself in the middle of a custody battle. Her mother was desperate to hold on to Paige. She went to live in Texas with a man she met online, and she took Paige with her. It didn’t take long for the police to track down her mother and hand Paige into her grandmother’s hands. But that was not the end of his misery. For the next 13 years of her life, Paige spent her time wandering between foster families and the two families. When she was old enough, Paige took a few jobs to finance herself through college. Even as a student, she had a passion for exercise, and she trained whenever she could at the university gym on campus. However, she had never paid any attention to her diet. Paige was always very skinny and hardly muscular at all. Despite playing soccer and being active throughout college, nutrition has never been a priority. She began to accept that being too thin was just as bad as being overweight. Paige became unhappy with her physique and found a new desire to be a fit and strong woman. She was the first to inspire him to start a healthy lifestyle.

After being reached by a personal trainer at the gym and talking about Bikini competitions, Paige began educating herself on nutrition properly. His conversation with the trainer further motivated him to stay fit and strong. It didn’t take long for him to decide to enter his first show, the Ronnie Coleman Classic. She increased the training intensity. Over the next 4 months, Paige started training and pushing her body like never before. The clock was ticking as she raced to get ready for the stage, she.

The day of the competition finally arrived for Paige. After months of meticulous preparation, America’s largest statewide NPC competition has arrived on the scene. She did not win the first prize, but she earned a place on the podium after placing second. However, it wasn’t just pride that he had to take home from this experience. Paige realized how much she enjoyed the competition and she longed for more. She has set her sights on inspiring others through social media, she.

After reaching out to nutrition and bodybuilding companies, Paige became the face of a company. She realized the power of social media, how fast her followers were growing, and how many people supported her progress. However, dissatisfied with this new exposure, he decided to create an Instagram profile in 2015 to build a larger fan base. Almost instantly, she found an audience of followers who liked photos of her physique and workouts. But she didn’t stop there either, she. Rising from her Instagram success, Paige decided to create a website and become a personal trainer. In addition to creating personalized training and diet plans for her clients, she posts pictures and videos on her website to keep her fan base happy. Paige Hathaway has 3.8m followers on Instagram with the username paigehathaway.