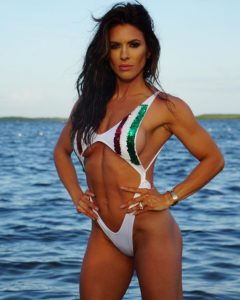 Amanda was originally born in 1979 in Pittsburgh, Pennsylvania. However, his true story began a few years later when he moved to Florida. At the age of 18 in 1998, Amanda’s main passion was music. At that time, he was part of the Florida band “Innosense”, which also included Britney Spears. To maintain the group’s image, Amanda was asked if she would go to the gym to stay in shape. Here he discovered his true purpose. After leaving the group and trying to go solo, he was dropped from the record label in 2003. This was a wake-up call. Since the group, Amanda has made great progress in her physique. Falling in love with training, Amanda realized that if she stepped up her game in the gym, she could make it in the fitness industry. In the same year, she aimed to become a professional Bikini Athlete at the age of 24. After her music career, she wasted no time entering her first pageant, the 2003 Miss Bikini Florida. He began training twice a day, 6 days a week to prepare for the show. He was more determined than ever to succeed. By the time she took the stage in Florida, she was starting to develop her dream physique. All his hard work paid off.

After being the first, he walked away from the competition with the trophy. This was the start of a highly successful journey for the future fitness legend.

Amanda had an excellent start to a competition career. 1st place in 4 Musclemania shows between 2007-2008. After reaching the pinnacle of success in Musclemania, he started competing in NPC. During 2009, he dominated 5 shows, taking home the trophy in every competition he entered. But his hard work did not end there. At the end of 2009, he took his place at the IFBB Olympia. He raised his training again, being careful not to lose momentum. He knew this was his chance to win a Pro Card. After years of rigorous training, Amanda tasted victory at the prestigious IFBB Olympia. Finally, he had earned the Pro Card, which has been his goal since starting his fitness journey. But this was just the beginning.

After achieving everything she wanted as a contestant, she embarked on a new journey. He wanted to enter the industry by helping others achieve their dreams. In 2014, Booty Queen started her new career as an online personal trainer, aiming to inspire the next generation of fitness icons. Amanda Latona has 596k followers on Instagram with the username amandalatona.